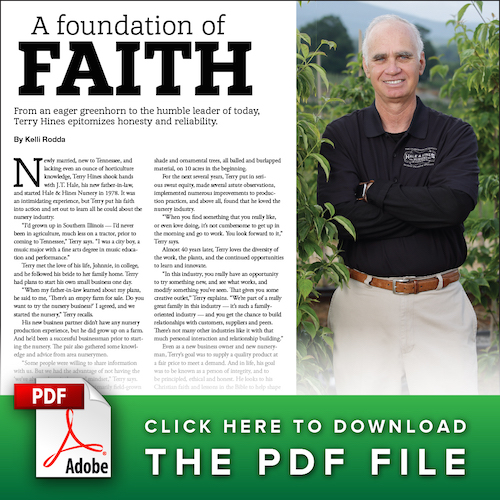 Original text from “A foundation of faith” by Kelli Rodda. View Article On Greenhouse Management Website »

From an eager greenhorn to the humble leader of today, Terry Hines epitomizes honesty and reliability.

Newly married, new to Tennessee, and lacking even an ounce of horticulture knowledge, Terry Hines shook hands with J.T. Hale, his new father-in-law, and started Hale & Hines Nursery in 1978. It was an intimidating experience, but Terry put his faith into action and set out to learn all he could about the nursery industry.

“I’d grown up in Southern Illinois — I’d never been in agriculture, much less on a tractor, prior to coming to Tennessee,” Terry says. “I was a city boy, a music major with a fine arts degree in music education and performance.”

Terry met the love of his life, Johnnie, in college, and he followed his bride to her family home. Terry had plans to start his own small business one day.

“When my father-in-law learned about my plans, he said to me, ‘There’s an empty farm for sale. Do you want to try the nursery business?’ I agreed, and we started the nursery,” Terry recalls.

His new business partner didn’t have any nursery production experience, but he did grow up on a farm. And he’d been a successful businessman prior to starting the nursery. The pair also gathered some knowledge and advice from area nurserymen.

“Some people were willing to share information with us. But we had the advantage of not having the ‘we’ve always done it that way’ mindset,” Terry says. 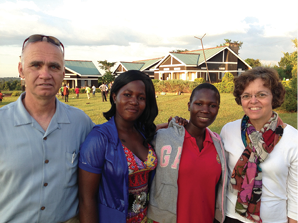 Terry and wife Johnnie on a mission trip in Uganda.

Hale & Hines Nursery sold primarily field-grown shade and ornamental trees, all balled and burlapped material, on 10 acres in the beginning.

For the next several years, Terry put in serious sweat equity, made several astute observations, implemented numerous improvements to production practices, and above all, found that he loved the nursery industry.

“When you find something that you really like, or even love doing, it’s not cumbersome to get up in the morning and go to work. You look forward to it,” Terry says.

Almost 40 years later, Terry loves the diversity of the work, the plants, and the continued opportunities to learn and innovate. 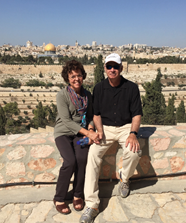 The couple make a trek to Israel almost annually.

“In this industry, you really have an opportunity to try something new, and see what works, and modify something you’ve seen. That gives you some creative outlet,” Terry explains. “We’re part of a really great family in this industry — it’s such a family-oriented industry — and you get the chance to build relationships with customers, suppliers and peers. There’s not many other industries like it with that much personal interaction and relationship building.”

Even as a new business owner and new nurseryman, Terry’s goal was to supply a quality product at a fair price to meet a demand. And in life, his goal was to be known as a person of integrity, and to be principled, ethical and honest. He looks to his Christian faith and lessons in the Bible to help shape his values. He lives by Colossians 3: 23-24 — 23Whatever you do, work at it with all your heart, as working for the Lord, not for human masters, 24 since you know that you will receive an inheritance from the Lord as a reward. It is the Lord Christ you are serving. (New International Version)

“People recognize when you’re working for the Lord and not for yourself or any other man, whether it’s your boss, your customer, or anyone you come in contact with,” Terry says.

Being honest not only keeps you out of trouble, but it builds solid and long-lasting relationships, he notes.

“As long as you’re truthful with everyone, you don’t have to remember what you said,” he says.

Terry’s sons (John, James and Peter) have all joined the family business.

Prayer and thanksgiving are integral parts of Terry’s life. Each day the staff gathers to say a word of prayer before lining out work.

“I try to always be thankful. Complaining is the opposite of thankful.”

Although Terry’s dad died while he was attending college, he learned self-confidence from his father — a trait that served him well as a new business owner learning the ropes of an unfamiliar industry, and as a seasoned nurseryman trying new production practices.

Much like that first foray into the nursery industry, by 2003 Terry was about to implement pot-in-pot production after growing B&B trees exclusively for 25 years. That same year, Terry’s son James joined the company. The nursery started with 15-, 30- and 45-gallon containers. But Terry didn’t go into the change lightly. He researched it and met with other industry colleagues to learn about the process. 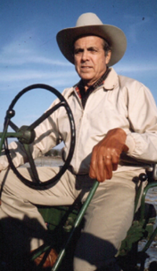 “I tend to be cautious, and I really think on things for a while before making a major change like we did with container production,” Terry says. “I probably looked at it for a year, and we visited with people such as Charlie Parkerson at Lancaster Farms and Tom Demaline at Willoway Nurseries. They were so willing to share how they managed container production.”

The market was calling for more container trees, and Terry needed to act.

“Our business has always been blessed to have a good demand for the product we grow, and there was an increased demand in the market for container trees. Mainly because people didn’t want to inventory as much B&B material as they used to,” he explains.

At the start of their new container venture, Terry and his team modified a tree planter to install the PNP systems. They tried a second machine, but it was too slow and had too many moving parts, he says. Finally, they had a machine custom built to “plant” the pots instead of drilling holes for the sockets, which greatly increased efficiency of the labor-intensive project. The custom machine is pulled with a tractor.

Terry’s ability to modify and improve a process or piece of equipment is well-known in area nursery circles.

“He’s a very intelligent individual and he can do anything,” says Fred Shadow of Tennessee Valley Nursery in Winchester, Tenn., who sold Terry the first group of trees he ever planted. “He’ll look at what somebody’s doing and figure out how to improve it. He’s sharp and he’s innovative.”

Terry has implemented other innovations at the nursery, with a strong emphasis on irrigation. The nursery’s irrigation system from Tucor, a “smart” two-wire system, is state of the art and precise.

“We now water by variety with four different watering schedules depending on the variety,” he explains. “It’s got really good instrumentation, and can sense when the tree needs water and went to turn itself on and off.”

The pulse irrigation system has reduced water consumption by 20 percent.

“By measuring volumetric water content, we can look on our computer and see how much water has been applied and how it relates to things like variety or sun exposure, for example,” he says.

The nursery uses injection-molded containers equipped with handles. Terry says some have lasted since 2003. 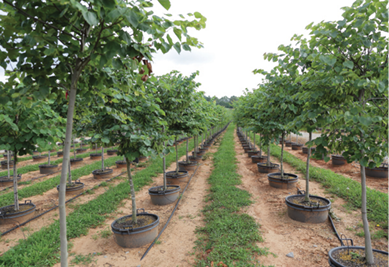 The nursery uses injection-molded containers equipped with handles. Terry says some have lasted since 2003.

Terry is no stranger to irrigation innovations. For five years, the nursery was an industry partner in a USDA study, led by John Lea-Cox with the University of Maryland, that researched irrigation sensors and technology. With assistance from Lea-Cox, Terry installed his own Decagon sensor network in 2009 to monitor substrate water content primarily in his dogwood blocks. In spring 2010, an additional 6-node (30-sensor) research network was installed on three red maple trees. Eight 10-HS sensors were placed in each rootball at cardinal directions (North, East, South and West) at two depths. Terry wanted to use his networks to actually monitor water applications and leaching by making some simple modifications to the outer socket pot. As a result, two ECRN-50 rain gauges were added to each tree to measure the applied irrigation volume from the irrigation emitter and the leachate from each tree. Terry had a weather node that provided him environmental data on a 5-minute basis. By monitoring the eight sensors placed in the upper and lower quadrants of these trees, he monitored soil moisture by depth and throughout the season in real-time, relating this information to irrigation frequency and duration, or volume of application.

“We received lots of information on how to make good irrigation decisions from that study,” he adds.

Terry has been experimenting with drones to help with tasks at the nursery, a technology that will take off soon throughout the industry, he predicts.

“I think drone technology has some tremendous potential,” he says. “I think it will be ideal for inventory management, indicating plant stress and mapping for expansion. We’re doing some of these things on an experimental basis, but we’re anxious to hear about Jim Robbins’ drone study at another nursery. We may also be able to check on individual spray stakes in the pots with drones.”

Terry doesn’t rest on his laurels. He’s constantly thinking about the next way to improve functions and practices.

“My dad continually tries to think of ways to automate the industry and he’s continually making things more efficient,” says son John Hines, who joined the family business in 2006. “He pushes himself to make the business more profitable, even when you think he can’t do anything more.”

“When he finds that new technology or piece of equipment, he openly shares it with anyone,” James adds.

Terry and his team look for ways to increase efficiency at every turn. The nursery created its own concrete plant and pours its own concrete, builds structures in-house and builds most of its infrastructure.

After exhaustive research, Terry chose an Italian-made injection-molded container with handles for easier management, and they are heavy duty and built to last.

“We’ve got some sockets that we’ve been using since 2003. That’s how much they hold up,” he says.

“He’s on the cutting-edge of just about everything. He has an amazing operation, and he has production down to an art,” Sharum says.